UPDATE: We published an updated post about this topic that provides solutions to common problems Office users encounter when embedding videos in all PowerPoint versions up to 2016. See the new post here.

If you’re using Microsoft PowerPoint, you might have encountered problems with embedding video files.

They might get displayed as a thumbnail on a slide but then don’t play during the presentation or might show an error and can’t be inserted into your slides at all. This is esp. true for older versions like Powerpoint 2003 or 2007.

One of the most prevalent reasons for these problems is that your video is not encoded in a format that your version of Powerpoint is able to recognise.

Here is an overview of supported video and audio file formats for each Powerpoint version over the years:

If your video is in one of these formats, chances are it’ll work fine in PowerPoint.

However this also depends on the video and audio codec within the video file. If those are not recognised by your computer, e.g. if a particular codec is not installed, or if it is not supported by your version of PowerPoint, the video won’t play in your presentation.

If you experience such problems, one solution that works in many cases is to convert the video you want to use to a format that PowerPoint understands.

A Simple Fix – Convert Your Video

For older versions up to PowerPoint 2007, this means changing the video format into a Microsoft proprietary codec such as WMV and to save it as an .ASF container. Videos converted this way will also work on older computers running Windows XP, Vista or Windows 7.

For PowerPoint 2010, you can either convert your video to WMV or to MP4, however in the latter case you also need to have Apple QuickTime installed on your computer.

Things get a bit easier with PowerPoint 2013 where the preferred video format is MP4 without the need to have QuickTime installed. However, the video and audio codecs in the MP4 container have to be H.264 and AAC for the video to work reliably. Converting the video to WMV will also work.

A convenient way to create a movie file that is guaranteed to work in any PowerPoint version is to use our free online video converter to change your original video into 1 of the 3 output presets for “Windows/Office”.

Clipchamp runs in your browser so you don’t have to download and install any software to use it. This comes in handy if you’re not allowed to install programs on your computer, for instance if it’s your work computer and you don’t have admin privileges. At the same time, Clipchamp also doesn’t upload your file to a 3rd party for processing, so everything happens on your computer.

Here is how to do it

Go to clipchamp.com and select an input video 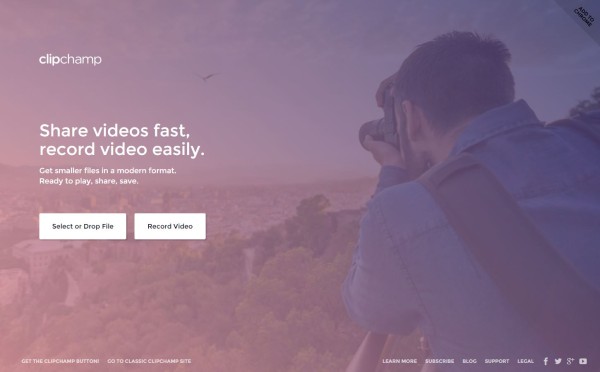 Once you selected an input video, on the next page that appears, select “best for Windows” from this dropdown menu 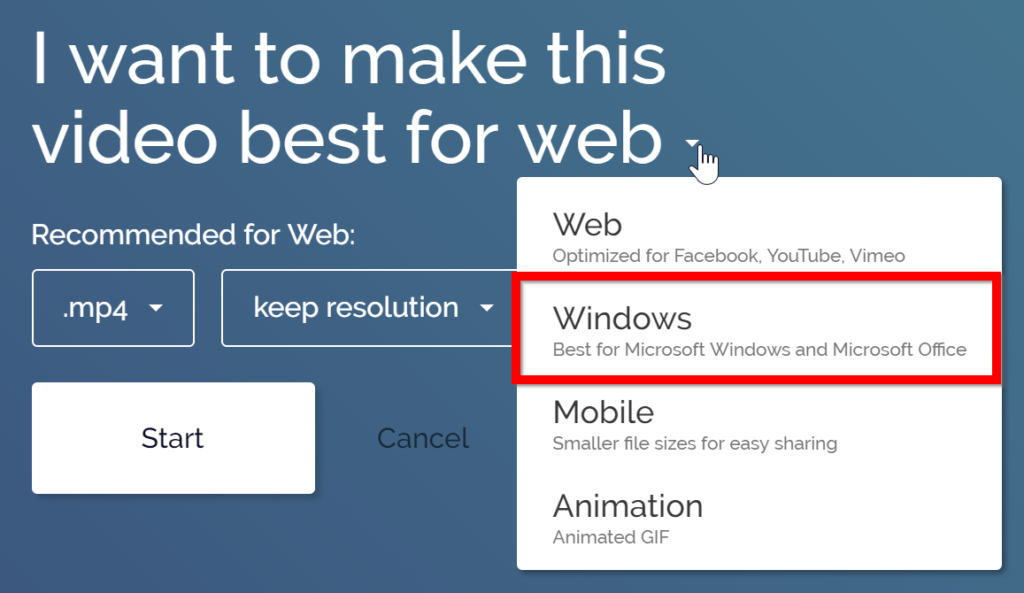 You can also make changes to resolution as well as compression level settings if you’d like to obtain a smaller video file. Please note that converting into the Microsoft Office compliant video format can lead to your output video being larger than your input video in some cases.

Then, start the conversion & wait for the video to get processed 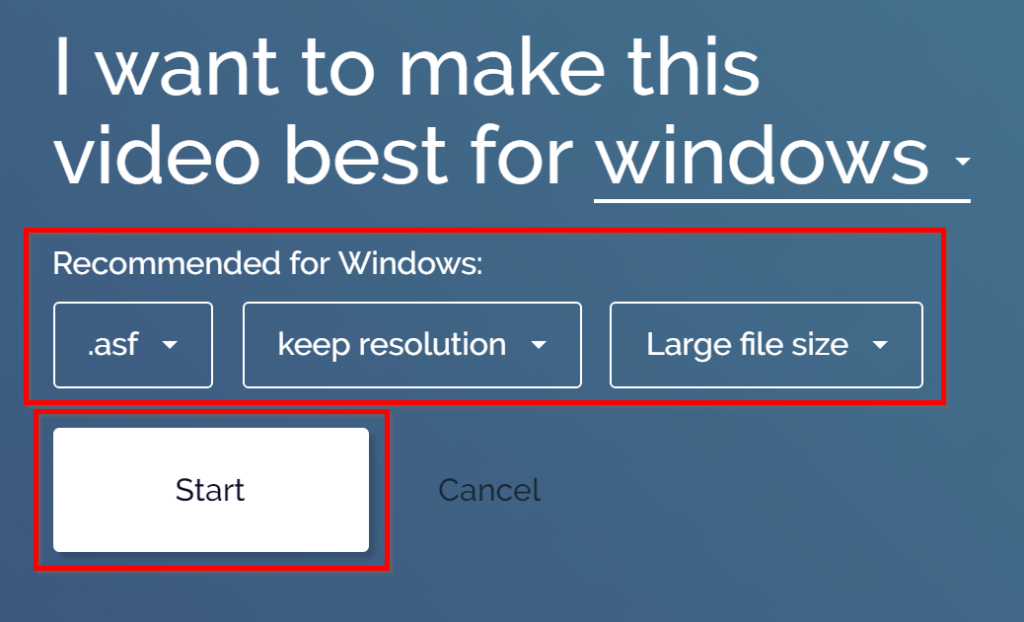 The finished video will be playable in Microsoft applications including Powerpoint.

Next, save the video file to your computer 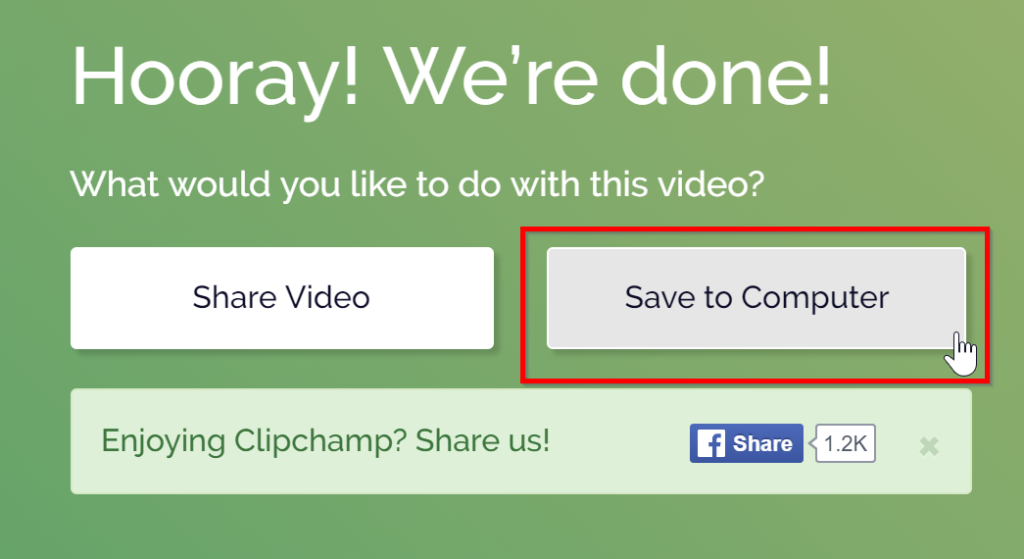 And the final step – embed the video in PowerPoint

The screenshots below are from the 2007 version. The workflow will be slightly different depending on the PowerPoint version you are using.

Open PowerPoint and go to Insert –> Movie in the ribbon

Select video file from your computer and click OK 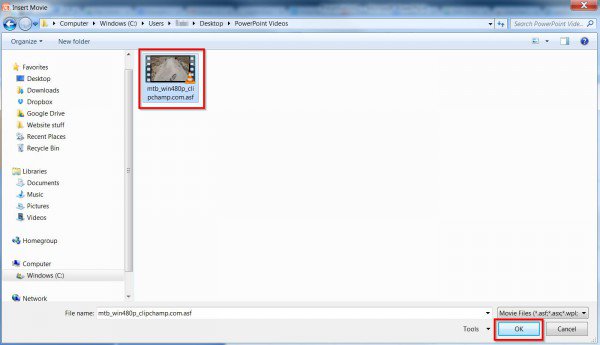 This is how the video will appear in your presentation 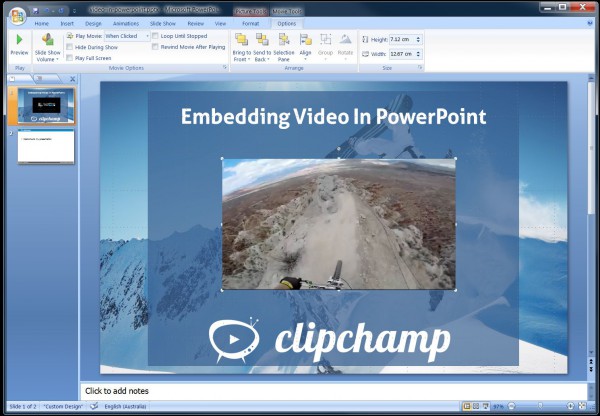 Ready to optimize a video for PowerPoint? 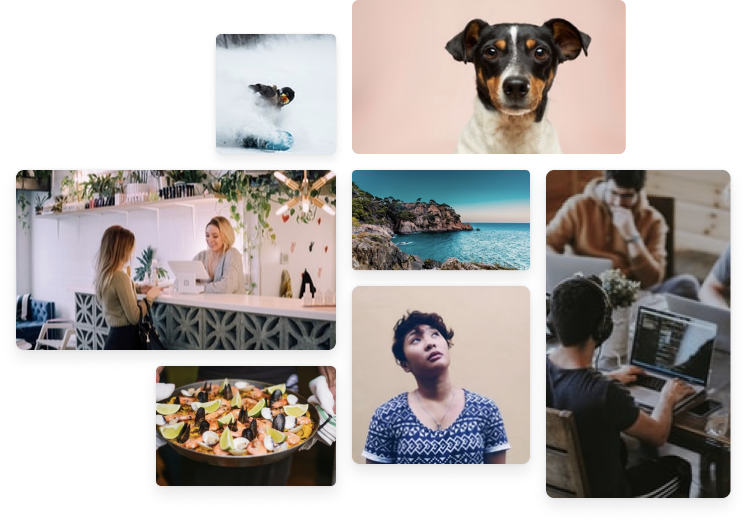 As you can see there’s an easy fix if your movie won’t play in PowerPoint by converting it to an appropriate format. You can use Clipchamp to do the job by installing it from the Chrome Web Store or by going directly to clipchamp.com.

Just make sure you choose one of the 3 Windows/Office output presets.

Please note that if you’re on a Mac, it’s best to convert your video to MP4 format where the video and audio are H.264 and AAC encoded. The app offers a number of suitable output presets under Mobile or Desktop/Web. You can of course also use our online video converter to convert a video to WMV on Mac.

This article on Wikihow is a step-by-step guide of how to embed your video in Powerpoint.

If you want to find out how to embed videos from external sources such as YouTube, have a look at this wikiHow article.

About the app: Clipchamp is a free online video converter and video compressor that reduces video file sizes while preserving video quality. It converts videos to MP4 or WMV and works in any operating system – Mac OS, Windows, Linux, Chrome OS.

The best browser to use Clipchamp in is Chrome, however the app also works fine in Firefox. It can work in Safari 7 & 8 and Internet Explorer 11, however might behave unexpectedly as support for these browsers is currently limited. Our recommendation is to use it in Chrome or Firefox.

We updated this post in March 2016 to show the video conversion process in the new Clipchamp.