Fades usually occur at the end of movies, film clips, or TV shows. But video fades can do much more than indicate an ending. They're also a great way to begin your video, especially if you want to create a sense of the theatrical – the term 'fade' comes from plays originally, after all.

Using a fade in and fade out back-to-back can also create an effective transition between scenes. Whether you’re making a short film or creating a promotional video, video fades are useful to communicate things such as:

And don't forget audio fades. You can use these to complement a visual fade, slowly fill a scene with music, or to stop changes in sound design feeling abrupt and clunky.

But these days, all you need is a computer. Sophisticated (and expensive) software like Adobe Premiere offers a range of fade options. If you’re looking for something simpler, however, Clipchamp’s online video editor is a great option. It’s free and easy to use, and you can add video fades in just a few clicks. Here’s how:

Fade in on the hopeful filmmaker opening the Clipchamp site. Close-up of their smile as they realise signing up is a one-click process!

In the top right of the Clipchamp Create page, you’ll see a button labelled ‘Create a video’. Click that to get started:

You’ll also need to choose from five options for your video’s aspect ratio.

Step 3: Add the media files you want to fade in or fade out

Once your project is set up, look at the top left of the screen and find the button labelled ‘Add Media’. Click that, and you’ll see options to browse your files or drag and drop them in.

You can add images, videos or audio tracks from your computer:

Or use the stock button to choose from Clipchamp’s extensive video and audio libraries:

The files you’ve added to your project should now be visible as icons next to the ‘Add Media’ button. To start editing them, you’ll need to drag them to the timeline at the bottom of the screen, like so:

Now click on the clip in the timeline to bring up a window with a range of editing tools. In this window, click on the tab furthest to the right, which is conveniently labelled ‘Fade In/Out’:

Under the Fade In/Out tab you’ll see two sliders. Drag these to the right in order to fade in at the beginning of a video clip or fade out at the end.

You can make your audio and video fades as short as 0.1 seconds or as long as 2 seconds. So, for example, you could have a quick, dramatic fade in and then a slower, more atmospheric fade out.

Adding audio fades works the same way. Simply drag a music or sound file to the timeline, select it, and use the Fade In/Out tab sliders to adjust how quickly the audio fades in or out:

Fades are also an effective way to transition between scenes if you don’t like the abruptness of jump cuts. To do this, add each scene to the timeline in the order you want them: 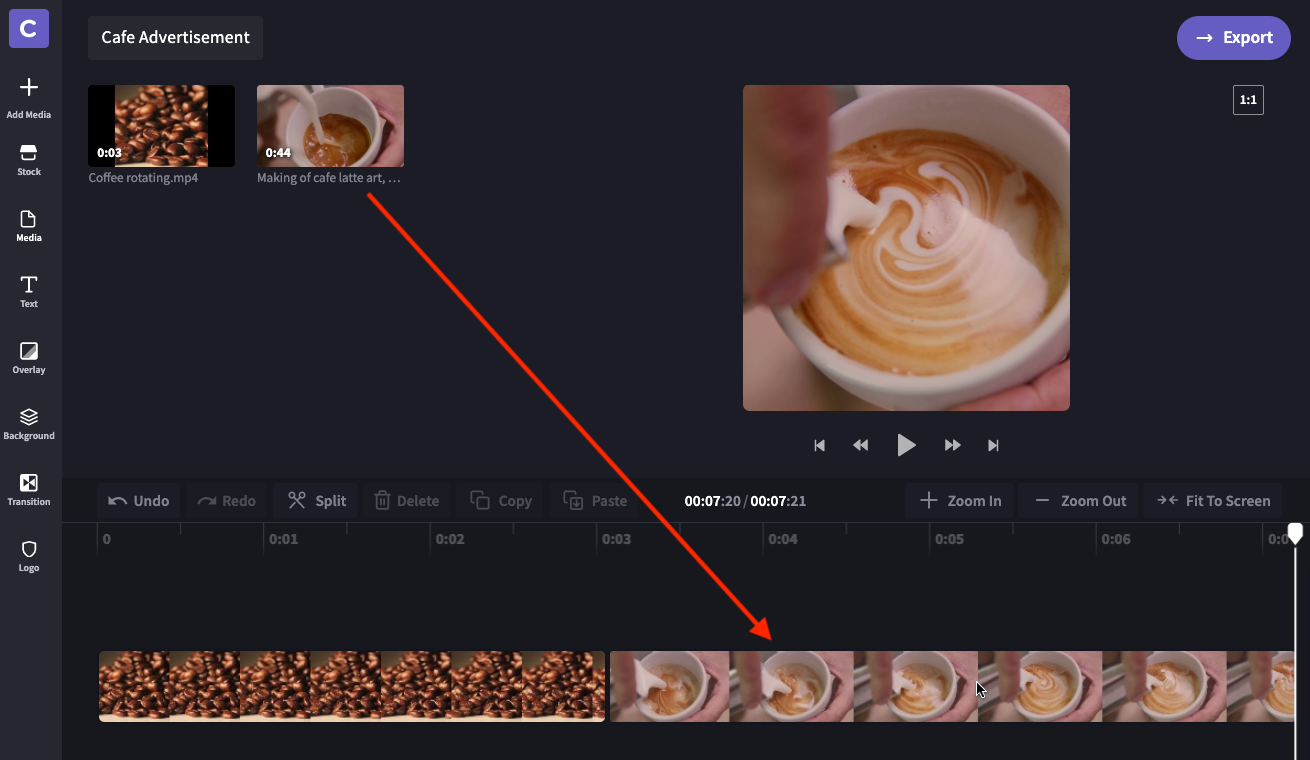 Then add a fade out to the end of the first video, and a fade in at the start of the second – now you have a seamless dissolve to black between the two! You can do the same to create fade transitions between photos and audio files, as well.

Here’s an example of how it looks:

TIP: want to know what other kinds of transitions you can add to videos in Clipchamp Create? Check out our tutorial on how to add video transitions.

Once you’re happy with your video fades, click ‘Export’ to save the new video to your computer.

Keen to make great videos but not sure where to begin? Clipchamp’s video template library offers a range of pre-prepared projects with relevant titles and music that you can use to get started. For example, here’s a template for a tourism advertisement.